Matango: Attack of the Mushroom People (1963) Dark Side of the Sun John Zorn on Japanese Cinema 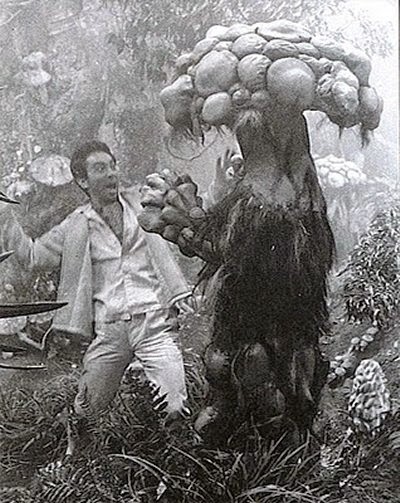 I owe an apology to the Japan Society.

We had been planning on covering the entire run of the John Zorn residency called Dark Side of the Sun John Zorn on Japanese Cinema but things got away from us after the initial screening. I even had a spy at the screenings of Crossroads,and Top Stripper but the pieces that I had hoped for ended up getting dissipated in long conversations about the film and differing versions.

However I’m going to try and rectify the problem by reporting on the final two selections Matango or Attack of the Mushroom People this month and a collection of Osamu Tezuka short films next month.

If you’ve never seen Matango  people you have to. Seriously no lover of film should go through their life without having seen it. It’s a singular work of cinematic art made by Ishiro Honda who probably had no clue what he was doing or how it was going to seem fifty years on.

The plot has a bunch of peopl shipwrecked on an island. Struggling to survive they run into problems with the mushrooms on island which seem to turn anyone who eats them into a giant walking fungus.

Trust me it gets even weirder

Based on Story by William Hope Hodgeson, the greatest horror writer you’ve never heard of, this is a bleak black story that can be read any of a number of ways. I have read any number of pieces on the film and everyone has mentioned the various ways the film can be read, and each threw in their own twist. The two reads of the film that most people take is as either n anti-drug film or as a look at the outsider’s place in society. I have no idea which is right or wrong.

I’m equally unsure if the film is a satire or a straight on horror/science fiction film. Admittedly uncertainty is due to the dubbing that the film was saddled with for its US release (according to Wikipedia the film may never played US theaters only TV-except perhaps Japanese language theaters on the west coast). It the typical job that most Godzilla films got and resulted in the films instantly being seen a crap by a lot of people. Seeing the film in the original Japanese the film is decidedly creepier than it plays dubbed but there are some moments where you can’t help but chuckle even as you’re wincing at the horror of it all.

I’m a huge fan of the film. Not because it’s a great film, I don’t know what I really think of the film itself, rather because the film forces you to react to it. Watching it you feel something. You aren’t passive, the film doesn’t wash over you, it kicks you in the shins and makes you consider it not only what it’s doing but also how you feel about it. Few films ever force you to engage with it the way this film does.(hell few films force to to engage at all). Good bad or indifferent odds are once you get to the end you’ll be like “what the hell was that?”

I don’t know, and I’ve seen it at least a dozen times over the years.

The film plays Friday the 23rd at the Japan Society. Go see it. For tickets and more information go here.
Posted by Steve Kopian at January 19, 2015