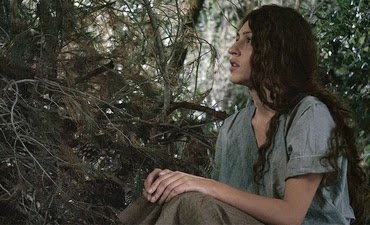 Based on Aharon Appelfeld's Tzili: The Story of a Life which was based on his own war time experiences Amos Gitai's film is going to puzzle many who will wonder about it's intentions.

Opening with our heroine dressed in white dancing against a black background in some sort of modern dance expression of pain the film then jumps to a forest in Eastern Europe where we watch as the young woman wanders through the forest hiding from the war which is happening just outside of view.  Eventually a young man wanders in and they begin to hide out together.

Last Year at the New York Jewish Film Festival ran director Gitai's ANA ARABIA which was the story of a journalist talking to a Holocaust survivor told in a single take. The big deal with that film was not the story but the single take which was supposed to impart some deeper meaning but instead removed the ability to connect with the characters because of the constant motion. Here Gitai's framing of the action cuts the ability to connect to or even care about whats going on screen

Some where around the half hour mark I tuned out. Filmed in a style that insists its about  something the film kind of falls away to become about nothing. Sequences are staged for effect or some sort of meaning rather than for dramatic effect. Shots are perfect images are constructions not representations of real life.  You can feel the meaning of each moment straining to spring out at you to such a degree that after a while you want to scream, "okay stop I get it".

To be honest I wouldn't have cared about being beaten over the head with the film's supposed meaning if I had connected with the characters or if I had become emotionally invested in the story. Sadly any feeling for the characters or the story went out the window almost from the get go because the film wanted to be about something important.

The film plays Monday and Tuesday at Lincoln Center. For more details and tickets go to the film's festival webpage.
Posted by Steve Kopian at January 16, 2015