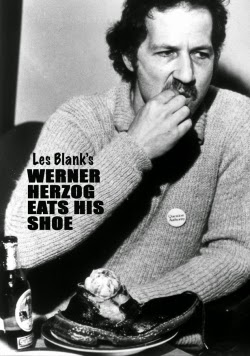 Les Blank's short documentary Werner Herzog Eats His Shoe is built on a bet between Werner Herzog and Errol Morris. Morris had still not made a film at that point of his life, and had abandoned previous creative endeavors (not just films). To egg his friend on, Herzog said that if Morris actually completed a movie, he would go to the premiere of the film and eat his own shoes.

And so in 1978, Herzog, at Chez Panisse with the assistance of Alice Waters, cooked his footwear in duck fat and spices for five hours and then ate his shoe in front of an appreciative Berkeley crowd at the UC Theater during the premiere of Morris' Gates of Heaven.

Herzog's persona is in full effect here—observant, at times seemingly alien, deadpan hilarious, but always intelligent in articulating the points he's getting at, and often poetic while getting there. At one point, he lambasts the inadequacy of the images in society that are fed to us by commercials and television, and says that maybe a society without adequate images is culturally doomed. Minutes prior to that, he talks about having once jumped into a cactus as a promise to one of his actors.

This sense of high and low—the absurdity of eating a shoe to push someone to create, the fact we can debase ourselves to allow others the ability to dream—is what makes Werner Herzog Eats His Shoe both silly and yet oddly inspiring. 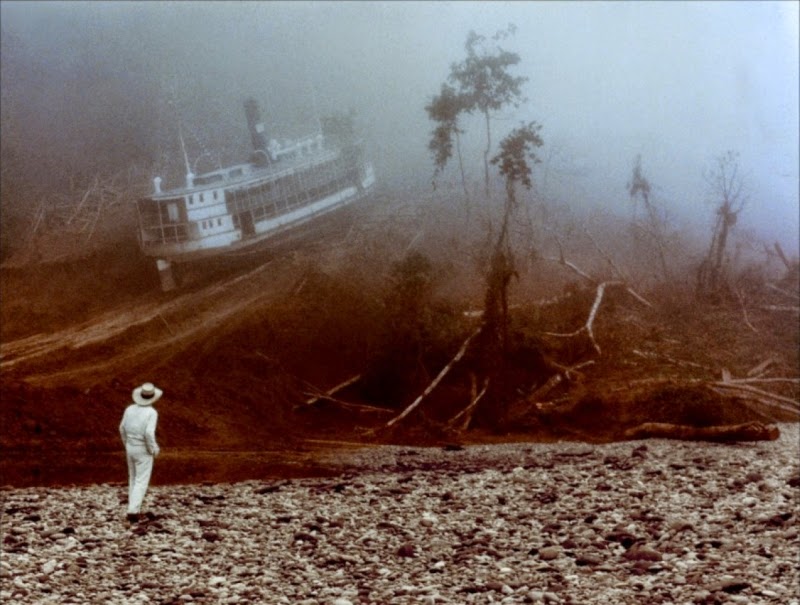 One of Herzog's more profound observations about the struggle to create art and the persistence of achieving this vision appears in two works about the making of Fitzcarraldo, the book Conquest of the Useless and Blank's 1982 feature-length documentary The Burden of Dreams: If I were to abandon this project, I would be a man without dreams, and I don't want to live like that. The line contains a dogged sense of hard work being worthwhile, the struggle being better than not having to struggle at all.

Werner Herzog Eats His Shoe offers two lines that I think could be viewed as a precursor.

The first: Making films turns me into a clown, but that happens to everyone; what filmmakers do is immaterial—it's a projection of light—and it makes you a clown in the process. Herzog says this while eating his shoe. As far as clowns go, I picture a clown who takes pratfalls and pies to the face yet keeps going; a silent clown like Charlie Chaplin's tramp (who appears briefly in the doc), or even a cartoon clown like Wile E. Coyote or Daffy Duck in "Duck Amuck," clowns less like Bozo and more like Sisyphus.

The second line, which comes at the end, is the burden of fools and a call to other creatives out there to be honorable clowns: To eat a shoe is a foolish signal, but it was worthwhile, and once in a while I think we should be foolish enough to do things like that—more shoes, more boots, more garlic!
Posted by Hubert at January 26, 2015