A little review of Little Accidents (2014) 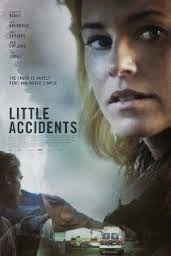 Little Accidents tells the story of what happens in the wake of a mine accident were several men are killed. The sole survivor is looked at as an outsider. The son of one of managers at the mine goes missing and everyone is trying to sort out what happened.

Extremely well acted and great looking this emotional cinematic dirge of pain and suffering is a deeply affecting film. It's a really good look at the trauma of living in a small company town and what goes on there. Its a film that will make you feel the loss and sense of being completely out of sorts with the world one gets with a loss.

I do have to be honest and say that this solid little drama has the misfortune to look and feel like at least five other recent independent films that I've seen at Tribeca and other festivals in the last two years. As  as good as the film is I could not completely take take the film on it's own terms and was comparing bits of it to other films. That said if you want a very good little film that oozes emotion see it.