Portrait of David Breurer-Weil an art dealer who turned into an artist is a stunning look at art and the creative process. Directors Guy Natanel and Annie Sulzberger follow Breuer-Weil over two years as he paints, installs sculpture and contemplates life and art.

I think the best way to describe this film is WOW.

This is a fantastic look at an artist and creativity. Its a glorious film that over whelms the eye, the heart and the mind. Its a film that is a work of art in it's own right.

One of the real joys of the film is the craft of filmmaking. Beautifully marrying image, with Bruer-Weil's words, with music with the art this film creates a marvelous head space and soul space where art and creativity filters off the screen and into the viewer. The gulf between  film and filmmaker  disappears as the large than life images created by Bruer-Weil fill the screen and forces us to become one with the art and the artist.

I don't know what to say Words kind of fail me.  This is one of the best films on art and creation that I've seen. And while I could probably pick portions of the film apart, the magic the film creates over the course of it's 80 minutes is so great that it wipes away anything that I could say about the flaws.

The filmplays January 20 and 21st at Lincoln Center. For tickets and more information go to the films festival page. 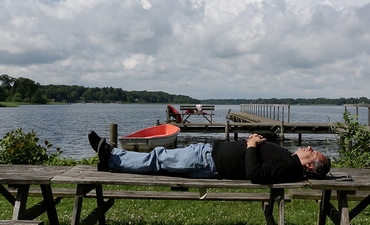