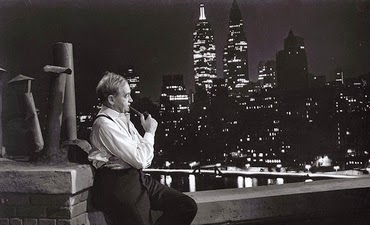 Running as part of the new York Jewish Film Festival’s side bar Noir and the City, The Naked City is one of the first large budget Hollywood films to shoot almost entirely on location since the film industry moved out west.

The film is structured as a portrait of New York City with the through line being the investigation of a murder. A young woman is found dead in bath tub and the case grips the city. Meanwhile detective Berry Fitzgerald and his partners try to run down what happened and why. All along the way we are treated to wonderful shots of New York not long after the second world war.

Full confession-until I sat down to watch the film for inclusion in the NYJFF coverage  I had never seen the film from start to finish. I thought I had but I was wrong.

It’s a good film that is ultimately more of interest for what it spawned rather than for what it is. As a film unto itself it’s a good and reasonably gripping film. In a weird way I understand why the film wasn’t a big hit either critically or financially. It’s not

The film itself, a police procedural of the sort that has been a staple of TV for decades is a good little drama, but it’s nothing special. Any uniqueness has worn away thanks to the decades of being copied. The mere fact that the film feels been there and done that speaks volumes about its influence. Everyone copied the film.

The film was also influential in its location shooting. Pretty much every scenes was filmed on location and it shows. The film feels real. Even now some 65 years later some of the stores and landmarks are still there. Even when you go to new stores now the old signs are there as well. Watching the film I kept going “I know where that is” simply because of the store fronts. Its very cool for an old New York junkie like me.

The on location shooting opened things up for filmmakers. People really could shoot on the streets. While its clear from some of the crowds that they didn’t lick the on looker problem the film did show it could be done. And yes it had been done on smaller scale previously, a shot here or there or by independents (say the film C Man).

If you want to see New York as it was or a good film that was wildly influential in any number of ways get down the Lincoln Center when the film Plays at the New York Jewish Film Festival.

The film runs on the 24th. For tickets and more information go here.
Posted by Steve Kopian at January 23, 2015