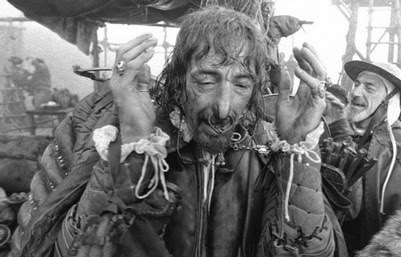 In name only science fiction film from Aleksei German that was ten years in the making and was finished by his son after he passed away. HARD TO BE A GOD is based on a novel by Arkady and Boris Strugatsky who also wrote the novel that Tarkovsky's STALKER is based on and it's even more obtuse.

The film follows what happens to one scientist after he and 30 of his colleagues are sent to the planet  Arkanar  for study. The planet was chosen simply because it was easier to get to than some of the other choices. Arkanar is a world roughly 800 years behind our own, but its anything like the Renaissance ever happened and barbarism and anti-intellectualism won the day. We watch as one of the earth scientists tries to save the intellectuals who are hunted, nudge the culture forward and not kill anyone in the process.

Shot in black and white and made to look like the worst medieval town imaginable the film has an almost tactile feel. You can almost feel the poo, pee , mud, snot and filth of the planet's everyday existence.This is a very dirty place. I suspect that Terry Gilliam is jealous since he clearly has up the ante of JABBERWOCKY.

While the film looks and feels great, I don't know if the film adds up to much. More a rambling series of seemingly random events rather than a straight narrative the film bobs and weaves and dances around it's themes and points for the better part of three hours. If you don't click with it all, and if you don't have a good deal of patience you're going to get board really fast. This isn't the random fractured story lines of say Tarkovsky's ANDRE RUBLEV, this is a seemingly random bunch of bits that slowly begin to tie itself together,

I was just about done about an hour into the film. I kind of knew what was what and really wondered why the hell the film was going to ramble on for two more hours. I know some people have loved this film, but personally its too little meat wrapped up in too much bread.

If you want to see a sort of film that kind of is about something and you'll be able to read a great deal into give it a go, for me, there are any number of better shorter science fiction and non science fiction riffs on the same themes.

The film plays at the Museum of the Moving Image tomorrow Sunday at 730. for tickets and more information go to the films festival web page. 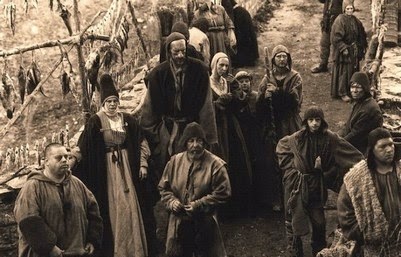