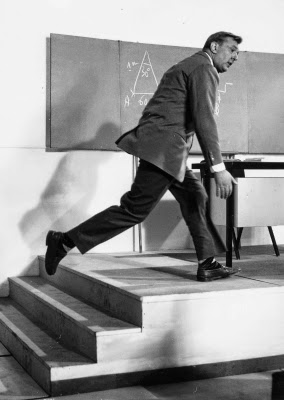 Jacques Tati doesn't play Monsiuer Hulot in the 27-minute short Cours du soir, but he sort of does. Directed by Nicolas Ribowski and shot on the set of Tati's masterpiece PlayTime, Cours du soir is a series of routines presented by Tati to a class of would-be Hulots demonstrating the art of comedy and pantomime. Some of the gags are reminiscent of Tati's past works, such as Monsieur Hulot's Holiday and Jour de fete (and ditto the short L'ecole des facteurs). When demonstrating a routine involving postmen on bicycles, the classroom even looks to the back of the room, as if acknowledging this bit of the short as a kind of retrospective act.

What's present in Cours du soir isn't so much a Hulot original but more of a lecture about Hulot-the-idea and about Tati's films and about observational comedy. Much of the humor comes from depictions of inexperience. Tati mugs for the camera as he mimics a beginning-smoker distastefully having a cigarette, and he shows a knack for anti-coordination when doing a tennis warm-up. The students themselves--a motley collection of dimbulbs and tyros (one of whom reminded me of Paul Begala, oddly)--demonstrate a certain kind of odd comedy from their inability to do pratfalls as well as Tati/Hulot.

It's bumbling, and it's funny as a counterpoint to Tati, maybe highlighting the Italian notion of sprezzatura, a kind of effortlessness and nonchalance that comes only through the mastery of an action. Tati has a certain sprezzatura about his gait and his manner and little gestures. This maybe says more about his body of work than Cour du soir itself, though.

Cours du soir is light on laughs and quite small given the scope of Mon Oncle and PlayTime and Tati's later works, and yet I actually found myself charmed by its wit. Maybe the film is more for Tati completists only--in some ways, it's like a sketchbook or a notebook rather than a full comic treatise.

"For homework, practice everywhere you can," the teacher tells his class once it's dismissed. For Tati, comedy can be made everywhere, from anything, with practice and attention.
Posted by Hubert at January 01, 2015