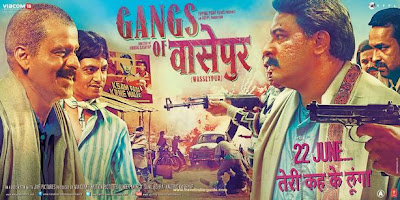 Opening Friday is The Gangs of Wassepeur and you have to go see it.

You do. You really do.

Trust me you do.

The easiest way to describe it as one of the greatest gangster films ever made. I’m very seriously about that, it is one of the greatest achievements in film you’ll ever see. No it’s not perfect, it’s five and half hours, covers 60 years of time and rambles all over the place but the overall effect is to leave you exhilarated and exhausted and wanting more.

I’ve seen the film a couple of time now and it floors me every time.

Here’s the review we ran when the film played Sundance back in 2013:

Epic, and I do mean epic, decades spanning tale of crime, revenge and struggles for control. This is a film that in it's way and complexity kind of dwarfs most other crime sagas and manages to stand alone among an elite group of similar crime films say The Godfather Saga, Once Upon a Time in America and maybe one or two others.

Beginning in the now with a group of men shooting up a house and "killing" everyone inside the film flashes back to before the Partition of India and Pakistan when England gave the countries Independence. Salid Khan impersonates a well known train robber. Thrown out of Wasseypur with his wife he takes a job in a mine. Once the partition comes and mines fall into private hands Khan is hired to help Ramadhir Singh get his mine up and running and to maintain control. However Singh fears Khan and has him killed. This sparks a sixty year battle between the families as Khan's son vows revenge, becoming a big time criminal in the process and setting the families on to a bloody path of destruction.

Running just under five and a half hours, the two films that tell the entire story are simply amazing.

For most people who think of Bollywood films as being huge bloated stories with the occasional big dance number this film is going to be a surprise. Yes, there are songs but they move the story along acting as an additional narrator. There are no big dance numbers only life on the street, the homes and jails. The music is incidental.

The violence when it comes is realistic and uncomfortable. people die badly, blood flows. Only toward the very end does the film slip, momentarily into a slightly unrealistic moment where the blood is a tad too red, but it's for effect. Until then, and even after, you feel each stab, each gun shot, each smash with a rock, and it's jarring.

The film isn't perfect, some of the shifts in tone can be a bit jarring, and for me the second half is a bit too talky when compared to the first. Then again I was watching the second half of the film sometime around 2AM on New Years Eve so I was getting a bit sleepy- and yet I pushed through because I had to see how it all came out.

I should also mention that this is based on true stories, with various incidents woven together to make a one long story

If you're at Sundance you owe it to yourself to try and see the film (though be warned it is five hours twenty something minutes long before intermissions) If you're not at Sundance do make an effort to see it when it plays near you- and I'm guessing this will play near many of you.

I’m telling you about the film now so you’ll plan to see it-it’s over five and a half hours long so you just can’t wander in randomly.

Trust me go see the film it will be one of the best film going experiences you’ll have all year.

For tickets and more information (including word on director Q&As go to the Film Society of Lincoln Center Webpage.