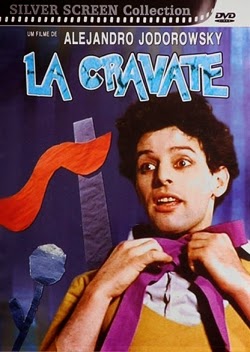 Alejandro Jodorowksy's films have included some level of silent-clowning, from the little comic routine in the second-half of El Topo to the remarkable play of hands in Santa Sangre and even the autobiographic nods in The Dance of Reality. This stems from his training as a mime under Etienne Decroux and working with Marcel Marceau, which finds great expression in the silent short La Cravate. Thought lost for five decades, a copy of the 20-minute film was found in a German attic in 2006.

Adapted from a story by Thomas Mann, the film centers on a man (Jodorowsky) uncomfortable with his own skin, hobbling around and fidgeting with a violet tie. He meets a woman who collects heads, and he swaps out his own head for others in order to woo another woman (who's not necessarily into him).

It's strange seeing Jodorowsky so young, which is odd to write, yet that gawkiness and bug-eyedness lends his silent clown an endearing quality. There's a discomfort in his own skin, and the film is about finding a kind of comfort or acceptance of the self. There's not so much a mind/body split going on as there's a general discomfort with the self and where one fits and what roles one plays and one's social obligations. It's no surprise when Jodorowsky's body (now wearing the head of a bully) knots the violet tie into something like a noose.

Beyond its importance for Jodorowsky completists as a directorial debut, La Cravate is in part notable for its use of color. Small touches of color and choices for outfits have remarkable personality, like a square of orange on a blue hat box, or a grayed-out pair of cleaners using a similarly muted yellow bug sprayer. Some images almost reminded me of a bright proto-John Waters. Jodorowsky's also finds some surreal visuals that stick despite his limited budget--a game of chess played with red apples and d'Anjou pears. Though maybe the low budget and the cardboard sets heighten the off-kilter charm of the imagery.

What makes La Cravate most memorable is the skill at physicality since this movie feels like a mime routine made as a film. Jodorowosky's out-of-sorts gait matches his character, and he makes the most of this mode when dealing in visual and physical comedy. Maybe my favorite scene in the film is a moment alienation. Jodorowsky's character (wearing another man's head), stands in the middle of a city in flux, and each bustling citizen has the odd look of an alien in posture and appearance.

One of these days I'll sit down with all of Jodorowsky's films and watch them in order, because I sense there's more here in La Cravate and in Fando y Lis that becomes realized in greater form later on, like colors in a painting reticulated and given shape and prominence.
Posted by Hubert at January 09, 2015