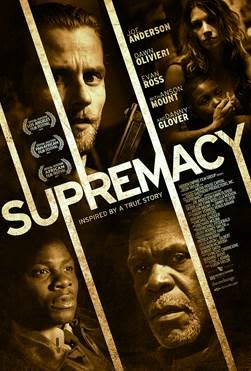 Joe Anderson and Danny Glover headliner a surprising good thriller about an recently paroled (as in earlier in the day) white supremacist named Tully who gets out of prison  and instantly gets into trouble by killing a black cop and taking a black family hostage. As the police search for him and the woman sent to pick him up Tully begins to clash with the patriarch of the family (Danny Glover) and ex-con who doesn't want to involve the police.

SUPREMACY is a film that surprised the hell out of me. It looked interesting enough that when I was offered it for review that I said yes. I didn't expect to be drawn into the on screen events as deeply as I was. This is one of those films that needs to be championed because I'm betting most people won't realize how good it really is.

I know much of the credit for the film working has to go to director Deon Taylor. Having cut his teeth on  okay horror films (his films DEAD TONE and CHAIN LETTER  were only memorable enough that I recognized that I saw them when I saw the poster art) he takes all of the tropes of the horror film genre and turns them loose on a crime thriller. While a hostage thriller isn't that far removed from a horror film Taylor keeps it real and never goes over board into the unreality of horror.

The script by Eric J Adams is also sterling. Adams has fashioned a fantastic thriller that not only works on a pure crime story level but bristles with not only racial tension and also family tensions as well. The most extreme situation being when the situation turns bad early on a forced choice made by one of the hostages and the family begins to fragment more. Not that it wasn't fragmented already with it far from being a happy family with Glover's character not being looked upon favorably and the complications of one son being on the local police force.

As for the cast it's all great, not good but great. Everyone manages to sell their roles to such a degree that you buy whatever it is they are asked to do. You accept any twists and turns without question because we believe in what they are doing.

This is a small scale gem you need to track down.  Truthfully don't let this film get lost.

The film opens Friday in theaters. For more info check the films website.
Posted by Steve Kopian at January 27, 2015