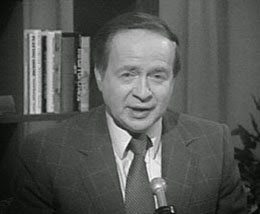 TV talk show host and raconteur Joe Franklin has died. If you've never seen his show you don't know what a loss this is. Below are the five tweets I sent out into the world after I heard of his passing.

Joe Franklin has died. The golden age of TV and film has become less bright in our memories

Joe Franklin was the best and worst in a talk show host, be brought together old and new, never would-bes with has beens and made it work

The best way to know Joe Franklin would be to just sit and watch his show for week. You can only appreciate him by seeing him

Where everyone is claimed to be one of a kind-Joe Franklin really and truly was. There will never be another like him-its just not possible

If you have no clue who Franklin was here's Gilbert Gottfried talking to him.
Posted by Steve Kopian at January 25, 2015