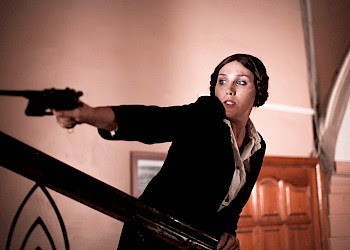 One of a kind film will enthrall some and confuse others as it tells the story of five Avant-gardists who make their way to a new city in the wilderness. They are looking to reconcile the Soviet ideas with those of the native people.

Part absurdist satire, part social commentary this is a look at what happens when very educated people clash with a native culture that wants no part of them. Set during the Kazym Rebellion (The press notes call it the Great Samoyedic War) the film reflects a portion of Soviet history where Communism was spreading outward, in this case into the wilds of Siberia. the natives wanted no part of the change and fought back. They held out for a brief period before Stalin sent in his troops and crushed them.

The film is at times very absurd as we see what the artists are doing and see how that clashes with real life, Its a a very literal representation of how the Soviets took their high minded ideas into the wilderness and forced them on the natives. The result was often rather silly. At first the natives are amused but as time goes things get violent.

This is a very good little film, though I'm not sure it will work for everyone. There is a knowingness to much if it that creates a bit of a distance. also some of the things that the artists do will come off as overly silly. As much as I liked the film I still wish that things had been played a little straighter, a little less formally.

On the other hand this was a welcome palette cleanse. Its a film that is very much not like every other film out there. Its a film that drew me in with its differences and its story of some history I never knew. I think it's a solid little film a definitely worth your time if you don't want the same old thing. 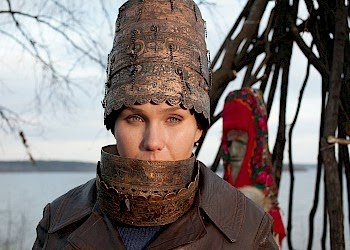