Alice Through the Looking Glass (2016) 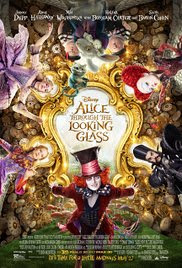 Scatter shot sequel to Tim Burton's ALICE IN WONDERLAND has Alice returning to Wonderland and trying to go back in time in order to save the Mad Hatter's family.

Glorious to look at film  is both bigger than what went be fore and smaller. While the sets are decidedly more epic the cast of character seems to have narrowed with a few of the carry overs reduced to little more than cameos.

The plot, such as it is, is a confusing mess that has Alice stealing the Chronosphere in order to go back in time. The trouble is that things get messy and where the earlier film had a sense that we are in a place where anything can happen, here we have a sense that anything can happen because the writers need it to go that way never mind if they have to rewrite the rules. This makes for a story that you kind of give up on about half through simply because things are just happening.

Its not bad but it isn't anything special. The truth be told, while I will look at the film again-it will be to look at it since the visuals are wonderful. And while I was hoping for a sequel when the first film ended when the end credits rolled on this story I was thrilled that everything seemed to be tied up with no sequel possibilities.

Now that it is on home video it definitely worth a look for fans of the first film but I think the film is going to be welcomed more by people who love the visuals.
Posted by Steve Kopian at September 19, 2019