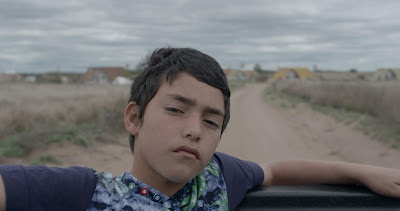 Ezequiel Yanco’s La vida en común is not a film for the faint of heart. A documentary about two young Ranquel boys hunting for a cattle-eating puma in northern Argentina, it contains several graphic scenes of killing and butchery. The very first shot of the film sees a wild boar captured, held down, and throat-cut, the camera holding on its gushing neck wound as its legs twitch and flail. We see scenes like these and understand that this is the brutal reality for these economically oppressed, racially stigmatized people who must hunt to survive.

And indeed this film is primarily interested with ushering viewers into the interior world of its subjects. But unfortunately, if La vida en común is not a film for the squeamish, it’s also not a film for those who enjoy good documentaries. As an aesthetic statement the film is marvelous in how it observes indigenous life in the dusty hillsides of the La Pampa Province; originally a people of nomadic hunters, the Ranquel were forced onto reservations in the late nineteenth century and it’s clear that even centuries later they still haven’t fully adapted to a sedentary lifestyle. The subjects only truly come to life when they’re hunting or driving or moving—contrast this to the deadening scenes of them learning Spanish in a schoolhouse.

But the film insists on having a plot, namely that of a coming of age story concerning its two subjects Uriel (11) and Isaías (13). For them, the hunting of the puma is a rite of passage and a metaphor for their looming adolescences. But instead of observing and letting the film express its story organically, Yanco stages things like a fiction film with sequences that obviously necessitated careful blocking and lighting such as one scene of alternating closeup shots of the boys and a newly arrived girl in their community staring at each other, blushing, and looking away. One can’t help but think of the early docudramas of Robert J. Flaherty like Nanook of the North (1922) where sequences involving indigenous peoples were deliberately planned and staged. But Flaherty films seldom entered the world of metaphor—if we saw a staged scene on an Inuit man building an igloo, it represented just that, the building of an igloo. But Yanco is trying to make a statement about manhood and maturity that feels betrayed with his obtrusive documentary techniques.