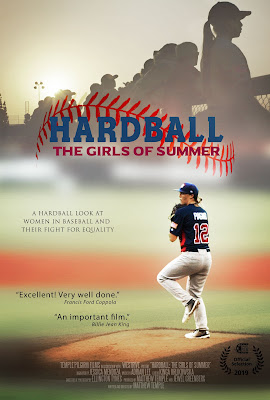 HARDBALL THE GIRLS OF SUMMER is an excellent documentary that is nominally about the US Women’s National Baseball Team as they battle for the World Cup in South Korea. It is also an exploration of the weird relationship that women have had with the sport as well as with various women who have played the game or wanted to but never could because it was a “men’s sport”.

The relationship women have had with baseball has been strange. Despite their having a mad passion for the game (I have a great aunt who was a fanatic and would start fights at both Yankee Stadium and Ebbits Field), they were largely not allowed to play the game for scientific reasons that made zero sense. Even today after women have made strides in football, boxing and mixed martial arts many men still see women as too dainty to play. Of course it’s utter bullshit and if you need proof all one need to is look at the women in the film to realize that there are a lot of women playing the game who could kick most major leaguers asses.

I really liked this film a great deal. While I could nitpick that it didn’t jump back and forth between some the threads as much as it does, it is still a winning piece of filmmaking. This is just a wonderful film that not only functions at bringing the story of women and baseball to light, but also entertains the hell out of the audience. This is a great time with great people with the result that we come to love all the women in it. Actually and most importantly it makes a solid case that there is absolutely no reason that Major League Ball should seriously consider letting women play on the big stage.

Highly recommended for anyone who loves the game or just wants to see a film that is going to make them smile. The film hits various home video platforms September 24
Posted by Steve Kopian at September 21, 2019