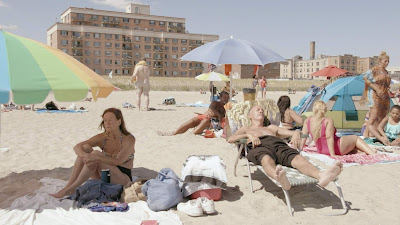 From street corners to beaches to anywhere people go, director Brett Story traveled around New York  in August 2017 and interviewed people about their lives and the state of the world.

This record of the state of New Yorkers is either going to thrill you or bore you. An intriguing, if very up and down film THE HOTTEST AUGUST works best in pieces. I say this because some of the people interviewed are more interesting than others, either because of what they say or because of where they were interviewed- say the two gentlemen who are interviewed at the start (they are hanging out a window in a house).

This is a film that is impossible to really review because how you are going to react to it is going to change with each person. Besides as a film it kind of isn't something special, rather this is a film that is the start of something not the be all and end all. I spoke with someone who saw the film at BAM Cinemafest earlier this summer and their reaction to some people was completely different than mine. As a result of our discussion, which lasted for two times the length of the film, the film because something else. Ultimately this is not a film so much as a conversation starter. It is a film you need to see with people who will engage with it and do more than simply say if they liked or disliked it but really talk about what the various people have to say.

If you want to see a film, especially with friends and family who like to talk about what you've just seen, then THE HOTTEST AUGUST is highly recommended. If you just want to see a film about the state of the world in one place and time it's still worth a shot.
Posted by Steve Kopian at September 15, 2019