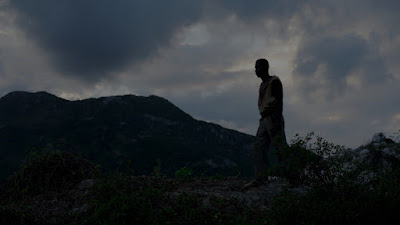 The Haiti segments are a loose retelling of the story of Clairvius Narcisse, one of the only people credibly alleged with becoming a real-life zombie. These sequences are an absolute marvel, dwelling on the minutiae of the Haitian vodou rituals required to create, maintain, and control zombies as forced laborers in sugarcane fields. Bonello’s constant use of dimly lit close-ups creates a claustrophobic aesthetic that evokes the early zombie horror films of Victor Halperin and Jacques Tourneur without stealing from them. But these are intercut with mind-numbingly tedious scenes of schoolgirl drama at the Parisian Légion d’honneur boarding school where a lovesick teenager named Fanny (Louise Labeque) convinces her new Haitian immigrant friend Mélissa (Wislanda Louima) to help her steal the heart of a boy she loves. In between literal lectures about French liberalism and history, of course. Bonelle bashes us over the head with the intellectual rationale for the film: the Western exploitation of Third World narratives of tragedy and suffering. Narcisse’s captivity makes clear the capitalist origins of the modern zombie myth born from the transatlantic slave trade—black people are kidnapped, enslaved, and forced to work the rest of their lives producing sugarcane. Meanwhile Fanny’s motives to appropriate vodou are as vapid and hollow as her pathetic attempts at poignancy in her midnight meetings with her secret literary sorority.

The problem is these boarding school sequences can’t seem to commit themselves to any singular purpose, switching between bitchy classmate intrigue, lurid sexual daydreams, and over-padded character moments such as Fanny, Mélissa, and their friends reciting an entire rap song in a single static take. By the time it finally builds to something in the last twenty minutes—Possessions! Black magic! Baron Samedi in all his glory!—we’ve long lost our patience and interest.