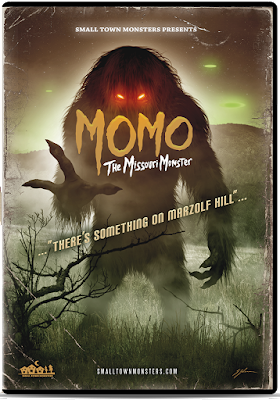 MOMO The Missouri Monster is a fun film. A mix of the bigfoot/Boggy Creek creatures on the loos films from the 1970 and the monster hunter shows that proliferate cable TV the film is just a great popcorn movie.

The film is framed as an episode of a monster hunter TV that has discovered the only known print of an unreleased horror film about MOMO, the man beast that terrorized Louisiana Missouri in the early 1970’s. The film was made in response to the success of The Legend of Boggy Creek but for various reasons was never released. It is intercut with modern interviews where the shows host talks about the events that inspired what happens in the film.

I really like MOMO a great deal. It is both a scary monster on the lose pseudo- doc and an amusing send up of the monster films of old. The film gets the modern sections dead nuts right and there are some genuine chills in those sections of the film where the story of the beast is related straight faced. It’s chilling.

While the throwback sections are entertaining there are two problems with them that keep them from having the fullest effect. First they are don’t quite match the films its aping. Yea the look is right, but as one who had gone through a good number of the films in the weeks leading up to being offered Momo, the film makes the cardinal sin of not playing it straight. The actors, who play the modern sections of the film deadly seriously, play the 1970’s section with a nod and wink, camping it up ever so slightly, taking the edge off not only the period section but the film as a whole. Rewatch Boggy Creek or Legend of Black Lake or any thing else and you quickly realize that even if the performances were bad, the actors were playing it straight. The other problem with the film is that actors appear in both sections. While this is no doubt due to budget issues, it weakens the film because what should be a straightforward film is instead kind of knowingly humorous because, as I stated above, they are not playing it straight in the old film.

But my quibbles are ultimately small. I had a blast watching Momo, so much so that when I was done I was emailing friends and family to tell them that the film existed and that they should see it. You should get some popcorn and see it too.

Recommended for monster fans I suggest you get some popcorn and take the plunge.
Posted by Steve Kopian at September 17, 2019