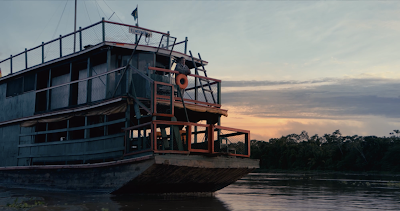 Portrait of Padre Ferdinand Bendoraitis, who was once considered second in saintliness to Mother Teresa. Bendoraitis ministered to the poor of Brazil and was said to have miraculous healing powers. However attempts to sort out his past turned up dead ends and questionable events.(I think)

One of my must see films became one of the biggest disappointments as what appears to be a truly intriguing story is completely garbled in the telling. Complicating matters more is the fact that in trying to sort out what the story is most of the things I could find only mention his saintliness. To be perfectly honest I had no idea what the heck was going on in this story which has a lot of people talking well of the man some talking suspiciously something about naked pictures, some other misdeeds and the question of who he was really. Full of people who don't always talk on point the film wanders all over the place like a man speaking his stream of consciousness.

I wanted to walk away but I wanted to see if this film pulled it together. It never did and I genuinely have no clue about Bendoraitis other than he was a priest in the Amazon and stuff happened. I won't speculate on the stuff good or bad.

A complete and total mess.
Posted by Steve Kopian at September 16, 2019

Email ThisBlogThis!Share to TwitterShare to FacebookShare to Pinterest
Labels: biography, Camden International Film Festival 2019, documentary, not worth the effort, religion