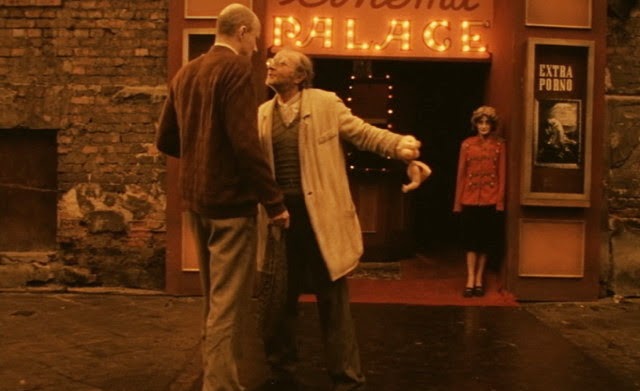 Piotr Szulkin's first feature film is set in a future sometime after a cataclysm. Scientists have been tasked with improving mankind and making men. They have succeeded and their creation is walking among men but unable to work and trying to get by. As he tries to get get out of the city, the men who created him make adjustments...

Strange science fiction film is full of style and brooding mood, but I'm not sure beyond that. Actually what I remember most of the film is its look, the color toned imagery, more than the plot line. There is lots of discussion of our place in the world, free will and politics. While its heady stuff and food for thought I'm not sure it adds up to much in the end...though to be honest it's great that any film would try to get it all in one hour and a half feature.

Watching the film I had the feeling that Terry Gilliam has seen the film and minded it for his own films specifically 12 Monkeys and Brazil.  I'm pretty sure that this film is one that has influenced the last 30 years of science fiction films, even though most people don't know it. Its for the influence that I suggest trying to track the film down.

If I seem to be ambivalent about the film, and I am to some degree, you have to understand that I admire the intelligence of the film. Granted I don't think the film succeeds completely in what its trying to do, but at the same time I admire that the film is trying to be an intelligent discussion of ideas.

The film screens on the September 6 and 7the as part of Lincoln Center's SCI-FI VISIONARY: PIOTR SZULKIN.
Posted by Steve Kopian at September 02, 2019