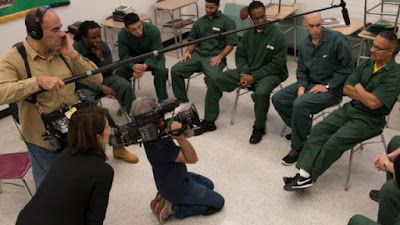 College Behind Bars is a very good look at the Bard University program that gives inmates in the New York prison system a chance at a college education. Over the course of four episodes the series follows several inmates over the course of the studies and we get to see them and the changes becoming better educated has on their lives in prison and hopefully outside.

I need to make a full disclosure at the start, I was given the four episodes to watch about three weeks before they premiered at the NYFF where they are running in marathon screenings. I am not sure how those seeing the film reacted to the film when it was run as a four hour movie, but my attempt to do that failed about ten or twenty minutes into the second episode. It wasn’t that I didn’t like the material, rather I felt that I needed to take time to process what I was seeing. Watching it all in one shot made it start to compress a bit, things began to run together. When the feeling came on I stopped and I walked away and finished the second episode several hours later and then I spaced out the remaining two episodes over the next two days. I mention the need to space things out because as good as the series is, and it’s a great series, the basic idea of the film runs very close to several other documentaries that talk about the life changing effect prison programs have on inmates lives. Honestly we’ve seen this before and watching the film in a block the film flattens and it can make you wonder why this is four hours. I stopped the marathon when I realized I had almost two and a half hours to go.

But College Behind Bars transcends the “been here and done that” feeling because the length of time allows us to really and truly see the difference the education makes in the lives of the inmates. We really see the men and women change over time. We are on the journey with them and not jumping through mere feel good moments. Additionally we get more details. We really get to know the people being profiled. And most importantly we become more solidly informed about the issues concerning providing programs like this. Having four hours to explore the people and issues results in something truly special.

Ultimately College Behind Bars is a great series. In this age where we are trying to reform criminal justice this series must be part of the discussion

The series screens again at the NYFF on September 30 (Tickets here)
It will air on PBS November 25 and 26.
Posted by Steve Kopian at September 29, 2019