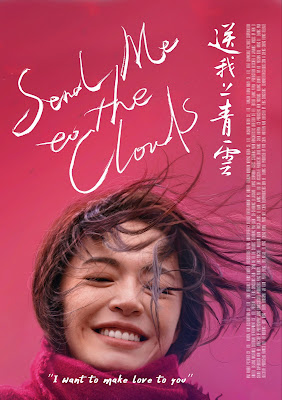 SEND ME TO THE CLOUDS is one of the best looking and thoughtful films I’ve seen in 2019. It’s stunningly gorgeous film that wraps lush and awesome (in the truest meaning of the word) around a heady discussion of what it means to be a woman today. While the film is specifically set in China, the film raises the stakes and makes itself greater by formulating the questions so that they resonate in the world at large.

The film follows Sheng Nan a photographer who is diagnosed with ovarian cancer. Having her world upset at the age of 29 she has to figure out what comes next. Needing to get some money together to pay for the treatment and wanting to experience the world’s sensations before the treatment wrecks her body, she sets off to figure out what comes next.

I should say at the start that watching the film I was struck by the feeling that as much as I liked the film, and I like it a great deal, I would be even more over the moon had I been a woman. I say this because the film’s exploration of how a woman is supposed to handle a world that wants so many contradictory things from them is one most modern women face. How do you face a world skewed toward men? You are supposed to be a wife and mother if that isn’t really on the trajectory you’ve chosen? What if the disease you have makes you unacceptable to finding a mate? Do you want one? Being a guy I could only intellectually connect with some of the issues being raised.

Ultimately it doesn’t really make a difference. While I couldn’t relate on the deepest of levels I could still ponder the issues. I could also connect to the journey of self-discovery Sheng Nan takes. This is the sort of journey that many people take when they are faced with something life changing. The need to reassess and reevaluate where we belong and what we want is universal.

I also could fall madly in love with the images. In a year where there have been a good number of great looking films that you’d want to just have play on you wall as a living painting, SEND ME TO THE CLOUDS is near the top. It’s images will make you sigh audibly. I was going “wow” repeatedly.

Highly recommended SEND ME TO THE CLOUDS opens in LA Friday before opening in theaters across America in the coming weeks.
Posted by Steve Kopian at September 16, 2019