Playing at the Portobello Film Festival in London this Friday THE RUEFUL WARRIOR is a 15 minute action film screaming for another 75 minutes around it.

The plot is simple a female warrior comes to earth to find help and water for her dying planet. She ends up in the middle of a war zone and has to fight to survive.

If you like action with a minimum of plot this is for you. There is almost no plot, something kind of kicks in at the end, but mostly this is 15 minutes of fighting. Its excellent action as pure motion this is recommended.

On the other hand if you want a plot this film is a little long.

However before you dismiss this film, stop. Not only is this a beautiful proof of concept for a feature film but this is an excellent calling card for writer-director Mark Owen who has made a film that has put him on my list of filmmakers to watch. As a calling card this is a must see because within five years Owen will be in his second mega-action-blockbuster. Trust me he is going to be HUGE and you will want to be able to torment your friends by saying you saw his RUEFUL WARRIOR before he was anyone and became a fan.

Go see this at Portobello Friday or the Show Low Film Festival in October or any other film festival it plays in. 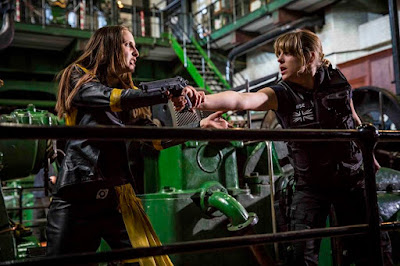