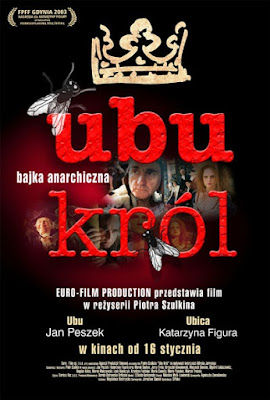 Allowing that Alfred Jarry’s satire Ubu Roi is a mean and nasty comedy, having it spun on it's head bu Piortr Szulkin makes it even tougher. In an age when the US is run by our own demonic leader the film takes on a potency no one could have ever imagined

Egged on by his wife Ubu, deposes the king and takes his place, promising democracy and freedom and instead bring ruin and destruction as the treasury dries up and the beer runs out.

Wickedly funny and nastily pointed, this spin on the corruptibility of those in power and the absolute stupidity of the masses would be under normal circumstances a poke in the eye. However living in the age of Trump this film is a gut kick as the twists and turns of Ubu's reign mirror The Donald's decent into madness. Of course his followers won't think so and I'm guess they will never see the parallels assuming they even watch the film, however for everyone with a brain the king's misdirection and striving for bread and circuses are dead on for the state of America.

Gritty and feral, as many of Szulkin's films are it all feels like a world in decay. This is the end times for the kingdom and as we watch it transpire we kind of can't be shocked its happening with such a terrible person in charge. I was shocked, horrified and wanted to take a hot shower.