One of the best films of 2019 of any length Unholy 'Mole (2019) is playing Horrorhound Weekend Film Festival Sept. 6th-8th 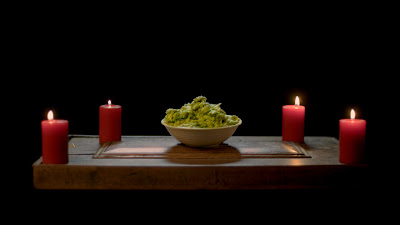 The reason I’m saying this is that Bornstein is back at it after A King's Betrayal, which was about the life of a piñata from the piñata’s POV, with Unholy ‘Mole, which is the story of a man who really really wants his wife to make him some guacamole and the steps he takes to have her do it.

I was deeply disturbed by this film. I mean what happens could be in the dictionary under the term wrong. Clearly Bornstein knows no boundaries, and if you need proof consider that even as I was feeling bothered I was laughing uncontrollably. Yes, Bornstein once again is working in the sweet spot where laughter meets horror and we are better for it.

This is a grand jewel of a film. As if Bornstein’s previous films weren’t enough of a calling card this film should put him on the radar of someone who has money for a feature film. And based on what we see here, with killer effects, great performances, an awesome script  and perfect unrecognizable vocal work by Ray Wise, the thought of giving Bornstein a feature budget could be a good thing.

But I am digressing….

Playing this weekend at the Horrorhound Weekend Film Festival in Indianapolis, where I am certain it will be a big hit, Holy ‘Mole is must see for anyone who likes horror or has a love of twisted humor. I can’t recommend it enough. It is one of the very best films of any length I've seen in 2019.
Posted by Steve Kopian at September 03, 2019