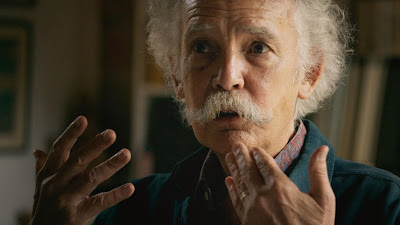 Portrait of anthropologist/folkloreist Henry Glassie’s work both during his whole life and more recently in Brazil, North Carolina and Ireland.

Curate's egg film is a film I am really split on. Much of the film is made up of long sequences where we watch the artists who are the focus of Glassie's work. Long sections of the film go by as we simply watch people carving or making pottery or painting or what have you. Indeed pretty much the entire first half hour is simply observation with no sign of the nominal subject of the film. Eventually we are introduced to a sculptor who creates with a kind of religious fervor and the film picks up as we get inside this man's head and heart. When we do really meet Glassie during the final hour of the film, we are treated to some truly amazing discussions with the man  that are inter-cut with more long sequences of his subjects.

The problem here is not the Glassie sequences which are some of the best sequences I've seen in a doc all year, the problem is the long observational sequences. While they are stunning bits of filmmaking in their own right, they do tend to go on to the point that the film is going to drive off many people who see it. Frankly I found the first 45 minutes largely a tough slog with way too much observation and not enough discussion. Frankly if I had seen this in a theater I would have walked out...which would have been areal shame since, as I said above are some of the best and most enlightening sequences in any film this year.

To be honest I know what director Pat Collins is doing on an intellectual level but on an emotional one it just doesn't work. We can't come into a film nominally about a person, only to have the person off screen for the better part of an hour. You'll lose the audience who are going to wonder why the film is titled as it is and whether or not the subject of the film shouldn't be something else.

For observational documentary fans and those who truly love Henry Glassie's work. All others are on their own.
Posted by Steve Kopian at September 07, 2019