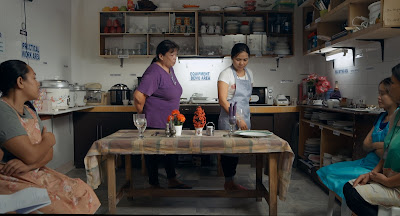 My thought twenty minutes into Overseas was that this film was destined to be on the Oscar shortlist. In a year where there are a large number of potentially Oscar worthy films, that I think that Overseas has a shot says a great deal.

A largely observational film, the film follows a group of women in the Philippines as they learn the skills needed to go overseas and become house keepers and nannies. We watch as the learn to cook, care for children and the infirmed; how to handle various situations such as angry employers and sexual harassment; and most importantly how to just survive, which is dispensed from the teachers who have been there and done that. Along the way the women bond and talk about their hopes and dreams.

Truly a slice of life, this film expertly reveals a facet of life that most of us never consider. How is it that the women who work for the rich or semi-rich learn to do what they do? What drives them? What do they hope to get out of working across the globe? Overseas provides the answers thus bringing us closer to something that is part of many people’s lives, but which I am guessing most people have never considered.

You will forgive me for not doing a deep dive into meaning and the like, but director --- has made a film I have very little to say about other than it is great. Sure there might be a moment or two where a sequence goes on a bit long, but overall the film just does what great documentaries are supposed to do and that is reveal a part of the world we see every day but never considered.