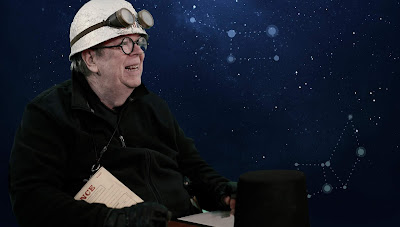 Portrait of artist Fred "Tate " Billings by his neighbor Michel Negroponte. A late blooming artist Billings spent years in the military dreaming of the day when he could retire and follow his heart and pursue his artistic desires full time. Working with clip art, his doodles and found objects he follows his creative urges wherever they take him.

A one of a kind film about a one of a kind artist this is a walk on the creative side as director Negroponte uses various techniques, including a clip art cinema approach to telling the story of an artist who needs to be noted (The film is was unsurprisingly produced by Guy Maddin). I was resistant to the film’s charms at first but watching the blending of cinema technique and the art being created on screen pulled me in. I was utterly enthralled by this outsider artist who is giving everything for his art. In a weird way this is the life that most artists would love to lead, which is allowing the passion to direct what we are doing.

I really liked this film a great deal. It opened my eyes to a way of seeing Watching it I realized it would make a killer double feature with Jeremy Workman’s MAGICAL UNIVERSE about similar outsider artist Al Carbee.