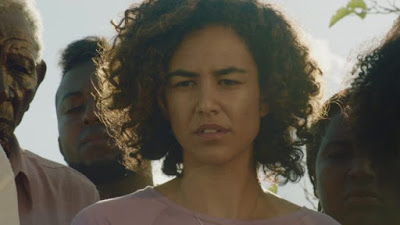 Bacurau is a Brazilian movie about a small town in Brazil, which isn't even listed on the map. It has a close knit community. The film starts with a death in the community and everyone coming together. We meet the sleazy corrupt mayor who the town hates and who is trying to get reelected by bribing the community with expired food and drugs that don’t have labels on them. We see several people putting something in their mouth, which I assume is drugs, but I'm not sure I know the point of this. Shortly after, the town's water truck arrives with bullet holes, horses from a farm nearby run into town, cell phone coverage stops working, and people start turning up dead. We soon find that a group of American foreigners are killing them for fun.

This is a messed up film. It's a violent film. So many questions are left unanswered. I saw this movie because of the hype and it winning the grand jury prize at Cannes, but I really don't understand how it won that award. Maybe some people might like this movie, but it wasn't my thing.

BACURAU plays October 1 and 2 at NYFF. For more information and tickets go here.
Posted by Steve Kopian at September 28, 2019