Ariela Rubin on THE GAME CHANGERS (2019) 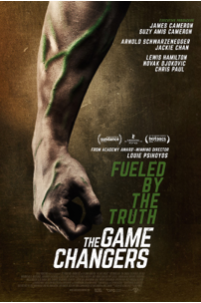 The Game Changers is a documentary that profiles athletes who are vegan. The documentary mainly revolves around James Wilks, a former UFC fighter, who now trains people in the military. He gets a knee injury, and decides to research what he can do to speed up his recovery. His path turns towards veganism. He actually finds research that shows that the bones of Roman gladiators were mostly vegetarian. On Wilks journey we meet vegan super athletes like Olympic cyclist Dotsie Baush, Scott Jurek, who ran the Appalachian Trail faster than anyone, and German strongman, Patrik Baboumian. We meet athletes who say they got stronger and faster after switching to a vegan diet. Game Changers also has doctors on screen explaining vegan protein myths and how not eating meat for even a day can change your blood (for the better). Arnold Schwarzenegger is even in it, and he explains how meat consumption was really pushed on him in his bodybuilding days. He has since switched to a mostly vegan diet. He says his cholesterol is now lower than it ever has been in his life.

I really enjoyed this documentary. I found that it really was educational, and explained things well. It was very thorough. There was a lot of research done, and they used easy concepts to understand. It was also entertaining. I do hope and feel that as the title suggests that it will be a game changer. I think it will have a lot of impact on current and future athletes, as well as your regular gym goer, or anyone trying to be healthier. A must see.

The Game Changers plays a country wide single screening tonight, then opens Friday in New York and the following week in LA
Posted by Steve Kopian at September 16, 2019