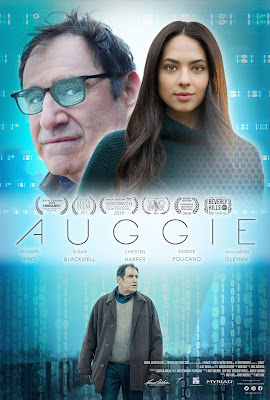 Richard Kind is wonderful in AUGGIE the story of a retired man who is given a set of glasses that give him the ability to see a virtual friend. The trouble is as he loses his way in retirement, the result of shifting family dynamics he begins to lose himself into the virtual world.

I'm mixed on AUGGIE. The problem is the narrative covers a great deal of ground that similar virtual reality films have covered before so this doesn't feel new, especially if you are a scifi fan. While it brings in more recent twists from the real world where everyone is tied to their cellphone and refuses to go entirely as expected there still is a strong sense of deja vu.

I will say that the reason to ignore the deja vu and see the film is Richard Kind. Long one of Hollywood's great actors he has rarely been given a chance to shine and really show what he can do. This is the showcase he really deserves and the chance to watch him go through his paces kept me watching even when I wasn't fully engaged with the plot.

While never bad the film never fully soars, except for Kind who is simply marvelous and heartbreaking in all the right ways. If you are forgiving and want to see what will be one of the under appreciated performances of 2019 give AUGGIE a shot.
Posted by Steve Kopian at September 18, 2019