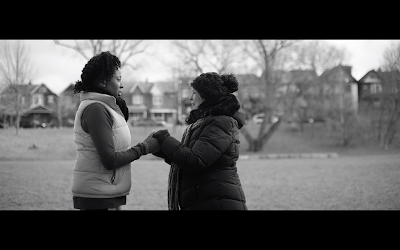 Life Support is a film in a series based on one of the First Person stories that run in the Globe and Mail, this one by Barbara Wackerle Baker. It is stunning piece of filmmaking that kicks the legs out from under you- even if you know where it’s going.

The film is the story of the awkward meeting of two women. One is resting in a park after a jog. The other comes along to collect her dog who ends up at her side after chasing a ball. After an awkward exchange of pleasantries one suddenly breaks down and hugs the other. It’s super awkward…and then it gets very human and touching… and just have tissues on hand.

A beautiful film that reminds us of the humanity of the people we interact with. Even as we go through these awkward moments there is a life in each person around us and sometimes it swings around and smacks us.

Watching the film during a lunch break at work I found myself going from this is an okay film to reaching for tissues as the weight of the world came crashing in. I was moved to tears, uncontrollably sobbing to such a degree that my office mates had to ask if I was okay. Yea, I was okay. Yea, I was better than that, I was momentarily reconnected to life in the best possible way.

I’m sure you could argue that Life Support is not a conventionally great film, but, when a film makes you feel human in an age where the whole world is trying to destroy us I can do without convention and just have a beautiful small moment full of life and humanity.