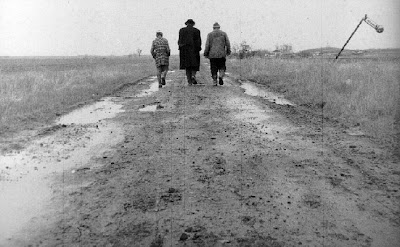 Made with the intention that you will watch the film in one sitting (with a couple of intermissions) Bela Tarr's seven hour adaptation of Lazlo Krasznahorkai's novel will either thrill you or make you run for the exits. Despite the fact that this has been popping up recently all over the New York Metro area at revival houses I sat down to watch it over the course of a very long evening at home on DVD where I could control the pacing and the breaks.


The film nominally tells the story of several characters who are at a a farming collective. It then spins out from there but it always crosses back and forth in such away that we see some events repeated from differing angles. We have two slackers who refuse to work, the various people in the collective who all want to take all the money they earned for themselves and then run off with it (but people keep finding out about the larceny), a young girl and a cat and all of the peripheral characters.

It's done in what seems to be Tarr's typical fashion: shot in black and white in long takes (as long as ten minutes) and often focusing on things which don't seem to be important (several times we watch tables as action goes on off screen). It's a beautiful and daunting film which for me held mixed rewards.

I've had the film on my shelf for about two years now. The trouble was finding a day or a night where I could just sit down and watch it. Having liked two of the previous three Tarr films I'd seen (Damnation and Wreckmeister Harmonies I liked, Man From London I thought was way too long) I wanted to give the film a fair shake- in other words at least try and see the film as Tarr intended-in one sitting.

For me the film is a mixed blessing. Its a beautiful film. It's an often funny and heartbreaking one. The trouble is that it's a frigging seven hour one and it's length is occasionally a killer.

Told in twelve segments of various lengths (from about fifteen minutes to about an hour) the film often feels like it's 12 short films tied together with a visual style and a group of characters. As is often said you could release several of them as short films in their own right. Watching the film it's at times almost too much of a good thing and I found that I paused after several sections to take stock of what I had seen.

The two problems for me with the film come from Tarr's long take mis-direction style. After a while some of the long takes, the walking to the horizon sequences and the focusing on a table or a chair or even a person while things transpire off camera wore thin. Granted I knew what I was getting into when I saw this film, but some where about two hours in,and knowing I had five more hours to go, my patience began to get frayed for however long we just sort of stared at nothing. On the other hand most of the rest of the film is actually quite good.

Is this a film for everyone?

Oh hell no. Its a long winded, rambling pretentious piece of film making. I say this with love and affection, and the badge of honor of having actually made it through the seven hours. Its an often painfully slow film that will reward those who can click with it and send others screaming from the room.

The choice to watch it is your own...

Actually the best thing about Santantango is the reviews it inspires. I would never have attempted the film with out reading many differing opinions on the films. They are a blast. If you want to start try Slates piece or the one at Spectrum Culture and then google some more. Watching people try to explain how they feel about the film is great fun.


(An aside with a possible spoiler- Having lost my place after pausing the film I found I had to scan to get back to where I left off...Watch the sequence with the dead person on the table at high speed and you'll notice they are breathing.)
Posted by Steve Kopian at September 24, 2019