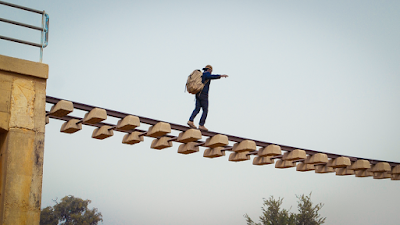 Following Burkina Faso’s 2014 popular uprising, the poet Bikontine hopped on a train and went from one side of the country to the other to explore not only the country itself but the lasting influence of Thomas Sankara, who had lead and transformed the county before before being assassinated by forces that  wanted to seize control of the country for their own ends.

Don't worry if you don't know  the country Burkina Faso going into the film (I didn't), you will on the other side as you get to know the people and places across the country. It's a wonderful  journey that will make you fall in love with place you've never been. It helps of course that we are traveling along with Bikontine who beautifully interacts with everyone he meets. Because of his knowing the right thing to say he pulls out all sorts of stories that no one else could.

Along the way we get to know about the life of Thomas Sankara, who transformed the country in the 1980's. Looking to make the country not reliant on outside influences he changed the way that many people saw themselves and their country. Of course this didn't sit well with those with a vested influence and he was assassinated. But death didn't stop his ideas from spreading and when the country threw out the people who opposed him Sankara's spirit was with them.

I absolutely loved this film. Striving to do more than just be a portrait of a hero or a country the film becomes something more. It is a film that fuels not only our hearts but our minds and becomes something we will carry with us.