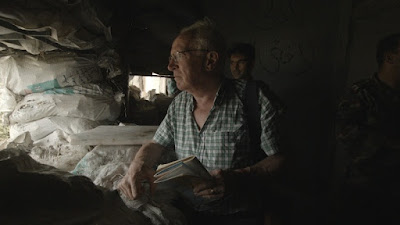 Yung Chang’s portrait of journalist Robert Fisk is a vital and important masterpiece. A desperately needed film about how we get the important information that guides our lives and the lives of our countries it more than makes a case that we need reporters on the ground looking and seeing what is going on and not just taking the word of sources and the internet.

Nominally a portrait of British journalist Robert Fisk who went from covering the Troubles in Northern Ireland to covering war zones, specifically in the Middle East, over the last four decades, the film does infinitely more. In following Fisk into Syria as he searches for the location of what is supposed to be the final battle of the war, the film allows the man to reflect not only on his life but also on the state of journalism. Stressing the point that we need people to go places to see and report back we watch as Fisk tracks down the stories of the conflict he was told by other reporters. As he goes on he shows us that almost no one is going out to see for themselves and are relying on the internet and other questionable sources about what is going on. Early in the film he goes to a forward position he was told was a hot bed of fighting to find not only it quiet but that there were no reporters there. The stories coming out of there were in error. Fisk’s point that we need people to actually go and see was made.

This film is full of food for thought. Nothing we see or hear is wasted. Everything ties into everything else and it kind of overwhelms that in these days of Twitter, a 24 hour news cycle and the Internet we have a film that is packed from start to finish with information and ideas. I’ve become so used to films, even good ones, dumbing themselves down that there was point where I was certain the end of the film was coming, only to look at my watch and realize that there was a another 90 minutes to go. I shrugged, smiled and then dove back in to a real meal.

What made me love this film even more was the fact that this film reminded me of the work of Australian journalist John Pilger who has been reporting for as long as if not Fisk. I have been a longtime fan of Pilger’s work because for better or worse, right or wrong, it comes from forming an opinion based on actually going somewhere and figuring out for himself what is going on. This desire to go out and get the story right has made them targets from all sides of the political spectrum depending on whose world view they upset. That I should make the connection isn’t surprising since both men write for the Independent (which reminds me maybe I need to subscribe).

As someone who loves documentaries this film is meatier and more thought provoking than any that I’ve seen in the last decade of doing Unseen Films. It is the exact opposite of “no think” spoon feed reporting that we have become used to in this age of Donald Trump and his fake news. This is an immersion tank of ideas and a call to actually get real facts beyond the superficial.

Easily one of the very best films of 2019. It is so good as to be in a completely different class as any other film this year.

THIS IS NOT A MOVIE plays September 9 and 11th at the Toronto Film Festival.For tickets and more information go here.
Posted by Steve Kopian at September 05, 2019