On the President's Orders (2019) opens Friday 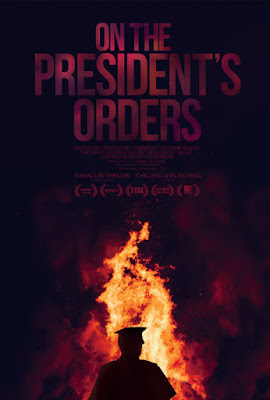 All the more chilling for looking like a well-made thriller On The President's Orders is a warning to the world and the future of what can happen when madness rules a country.

Beginning with a speech from Philippine President Rodrigo Duterte where he compares himself favorably to Hitler saying that he would massacre all of the drug addicts in the country like Hitler killed the Jews, the film then shifts to follow a command of police officers who have been tasked with changing the way they are doing things. The public is not happy with a police force that seemed to be out of control and highly corrupt. There are too many people dying in police involved shootings. So a new man is brought in. The film then follows as the police try to change their image and old ways begin to creep back (The higher ups are happy the number of police related deaths are down but unhappy it didn’t bring instant change) and talk of death squads begins to surface.

Slow boiling film makes you think that perhaps we are going to see some sort of change in the madness but as time goes on it becomes clear that any hope for change is not going to come easily. Watching the film I thought it was going to go one way but then I slowly began to realize that we really are in film noir territory and the darkness of men’s souls are still wandering around. There is a reason that one of the people we follow is a man responsible for picking up the bodies of those killed in the madness.

Having watched the film several hours ago I find I am still in a dark place. I feel slightly brutalized. Not from what is shown in the film so much as what the film doesn’t show but implies. As much as I would love to believe that all is skittle and beer and that the people who are tasked with trying to protect us have our best interests at heart. However this film makes clear that isn’t the case.

For me the scariest thing is it shows the dark side of humanity that here in America Trump is trying to harness. Trump has all but called for the same sort of treatment of illegal immigrants and those who aren’t white. He would gladly allow people to kill each other if he knew it would keep him in power and never come back to hurt him. On the other hand I don’t think Duterte really cares and he simply wants those he deems expendable removed.

This film is a stunner. Highly recommended when it opens Friday
Posted by Steve Kopian at September 30, 2019