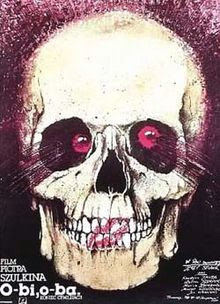 One of Piotr Szulkin‘s best films it is bleak gut punch concerning what happens after the world is obliterated in a nuclear war. A year on many survivors are crowded into a failing shelter. As Soft, a maintenance worker, discovers that the dome under which they live is failing he begins to investigate the stories of the Ark which is supposed to come and take them away to safety.

That Szulkin‘s film were ever released anywhere amazes me. Made in Poland his films are bleak little missives about the dark side of existence and official evil. The powers that be in his films tend to be evil as hell, and a weird version of the communists who controlled Poland. While I know that his WAR OF THE WORLDS was banned, the fact that his other films weren’t has to be the result of the masters agreeing with his vision.

What makes Szulkin films so powerful is the lived in quality. His worlds are the decayed lived in places of a future gone horribly wrong. Things are broken, repurposed and incredibly dirty. This isn’t bright and shiny but down and dirty.

O-bi, o-ba The End of Civilization is pure decay. The world is dead, as are the people living in it, but they don’t know it yet. Everyone is hoping for a better tomorrow that probably isn’t going to come. It says volumes about the gulf between our hopes and our reality. Watching the film broke me and I just felt sad. The zombie apocalypse that so many people insanely think will happen is a walk in the park compared to the nuclear nightmare of endless winter. Szulkin shows us the doom that awaits us all.

An end of the world film like no other O-bi, o-ba. The End of Civilization is highly recommended.

The film plays September 7 and 8th at Lincoln Center.
Posted by Steve Kopian at September 03, 2019