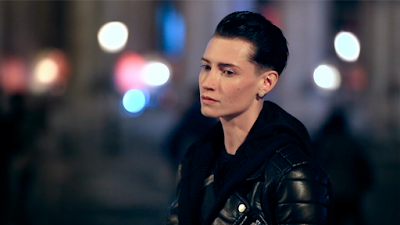 I don't have a great deal to say other than Krow's TRANSformation is not only a great film but  an important one as well. For any kid or adult who doesn’t feel that they are the right gender or living the right life this, film is going to bring at the very least a ray of hope. It may bring more, perhaps it will change their lives for the better.

The film follows Krow, a young man who was born a girl, but who always thought of himself as a boy. As a teen he thought he should get in touch with his feminine side and became a well-traveled model. Realizing that he needed to become who he was really he began the process of transitioning. Along the way Krow meets Kas Baker another young man like himself and his partner both musically and in life Emily Seal (the duo provide the music for the film).

This is a warts and all look at Krow and Kas‘s lives. There is frank discussion of everything involved in the whole transitional process. We hear the stories of bullying and abuse. We see the sadness and loss of way and we see the hope at finding one’s self and supportive family of friends. The whole hard road both, good and bad, is here. As a result we come truly understand the happiness they have found.

While decidedly not for all audiences, some people sadly will balk at a film like this, but for everyone else this is a great film. And  for those who are looking to find a way to be themselves this film is going to be a game changer. This is a film that is going to spread some hope. For those who need to know that there is a light out there this film is a must see.