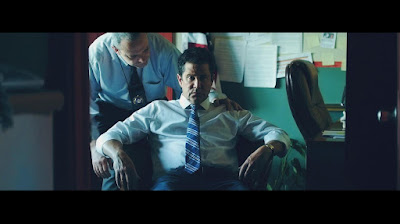 William Ragsdale returns to thrillers as a father trying to find out what happened to his daughter in When We Dance The Music Dies, a nifty little creepy confection.

Ragsdale’s daughter disappears after taking a dare from a friend that if she hits the buttons in a certain elevator in a certain order a gateway to another dimension will open up. The gateway opens and she goes missing leaving her father to try and work out what happened.

When we Dance is supposed to be based on the strange death of Elisa Lam. Lam was found dead in a water tank on top of a hotel. No one knows how she got in there. The creepy part of the story is not where she ended up but the really weird elevator ride she took before hand and which was recorded on security video. In the video she staggers into the elevator and then takes a ride in the elevator hitting random floors before wandering off. While the end isn’t the same the elevator ride to hell is.

Writer director Anthony de Lioncourt has taken the elevator and fashioned it into a creepy little confection. While the film echoes other films –‘s film works on it’s own terms thanks to a good script, good actors and an incredible series of sequences that perfectly marry sound and image to send chills up and down your spine. These stunning sequences carry the film over the occasional bump and keep the film centered and compelling.

I really like the film a great deal and if there is anything negative I have to really say about the film is that it runs just over an hour. While this would be fine for a TV series or a film from 50 or 60 years ago, where there were shorter films played with A releases. The run time is potentially going to prevent people from plunking down their cash since they aren’t going to feel they are getting a full feature. Of course they are getting a full story, but people are now sadly trained not to be certain what to make of an hour long film if it isn’t a children’s feature.

Don’t be stupid hunt this film down and give it a try. Its worth your time
Posted by Steve Kopian at September 15, 2019