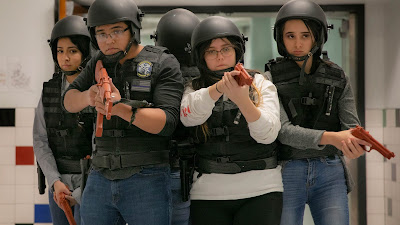 Portrait of the Criminal Justice Club at Horizon High School in El Paso Texas, The club seeks to teach the kids what it’s like to be a police officer, to the point of training them for a position in the  police by teaching them skills like handcuffing, taking fingerprints, and how to take down a bad guy with weapons. At the same time the club seeks to bridge the divide between the kids and the cops, while giving them a place to belong.

The problem with talking about AT THE READY is that while I can tell you what it kind of it, you really won’t know until you see it because mixed into everything are threads about the issues of being Hispanic with family members on the other side of the border in the age of Trump, being part of a marginalized community and its relationship to the police and in an unexpected turn, being gay. And there is even more here.

Actually there is so much here that I need another pass by it to fully get all the threads. That isn’t to say the film is heavy, its more to point out that the film has a great deal going on and I didn’t fully catch everything that it was bringing up.  I didn’t catch things because I was lost in the stories of the teachers, students and family members we meet. There are a lot of people and a great deal is going on. Watching the film is kind of like going to your significant others family Christmas for the first time. There is a lot of names and faces and things going on. You’re over whelmed in a good way the first time through, but the second time you can handle it.

I really liked this film a great deal. My initial thought when seeing what the club does was to groan and wonder why my high school didn’t do that. This is one you’ll want to see. It’s a film full of important ideas and good people, with the result it touches the head and the heart and makes you want to dive in a second or third time.