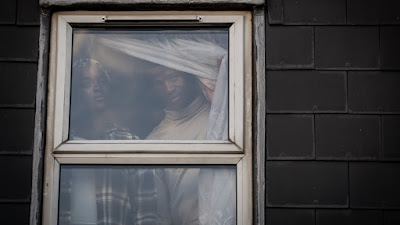 “Well, why don’t they just leave the haunted house,” the smarmy viewer smirks, leering like they’ve won some great debate against people who actually enjoy horror movies. Ignoring the most obvious answer—because if they left the haunted house there wouldn’t be a movie—there are simple explanations for why some people stick around after the walls start dripping blood. Some are too stubborn or defiant to leave. Some are magnetically drawn to the house and its evil. But Remi Weekes’ His House represents a rare third option: some people literally can’t leave.

The film follows Bol (Sope Dirisu) and Rial (Wunmi Mosaku), two South Sudanese refugees in London struggling through Britain’s draconian asylum system. After surviving a deadly midnight English Channel crossing which claimed the life of their daughter Nyagak (Malaika Abigaba), they’re placed in a vermin-infested government-owned flat and given several chilling ultimatums. Move out, and we’ll find you and deport you. No guests, they’re told, no fires, no parties, nothing other than the bare essentials for survival, or you’ll be back in South Sudan. But do try to be two of “the good ones” and assimilate, alright? It’s an impossible situation, but Bol and Rial both try to make the best of it, swallowing their dignity whenever they go outside and doing their best to appear and act “British.” But the more they try and distance themselves from Africa, the more Africa whispers to them from the darkness. The walls rumble in the night as infernal things scratch and hammer from the other side of the wallpaper. Terrible memories warp into waking nightmares as eyes stare at them from the shadows. Before long they realize they’re not alone in their flat. Something came with them from South Sudan. Something angry. Something vengeful. Something they can’t run from, for it will always find them. It knows the full measure of their sins during their flight from Africa, and it will see their debts repaid.

His House might be the best horror film of 2020; not since Ari Aster’s Hereditary (2018) has one so perfectly married new school James Wan-style jump scares with the exhaustive emotional self-flagellation of so-called “elevated horror.” It manages a ghastly amount of thematic heavy-lifting—survivor’s guilt, parental grief, cultural assimilation, and self-forgiveness—yet never loses its footing. This is horror filmmaking at its most intelligent and fearless.