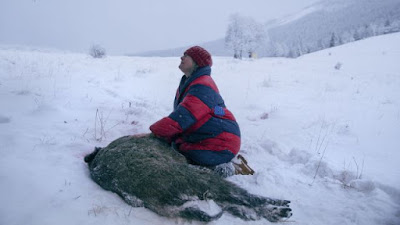 Unfortunately there is a point somewhere along the way where the deliberate pacing and the shift to the film making a forceful point about the environment and animal rights has the film go off the road like several of the cars in the film.  While the accident isn't a total wreck the film is still off the road and it never manages to get back in time to have a satisfying finish.

There has been talk of an Unseen FiIms Podcast for a while now but there has been lots of motion but very little progress. However  after the New York Film Festival Press screenings of SPOOR and BEFORE WE VANISH Hubert, on the clock for Flixist, and I grabbed an audio recorder and ducked into an alcove outside the NYPL Lincoln Center branch and recorded some hot takes on the two films which had just screened.

The recording called NYFF Hot Takes is the sort of thing that happens after most press screenings as we (and more often other friends) discuss the film(s) we had just seen. The recording is raw and off the cuff like our comments. It’s a moment in time capturing the pair of us trying to find the words that would become our reviews.