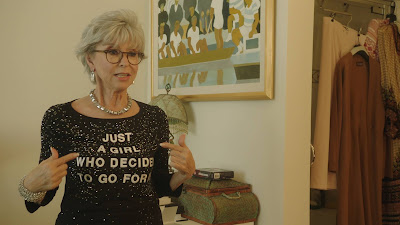 What I love about this bio of Rita Moreno is that for a couple of minutes it seems to be going a typical Hollywood bio, and then it turns hard and becomes something as unique as the woman herself.

Telling Moreno's tale from he birth to the present  this is no ordinary Hollywood feel good film. This is a tale f a fighter who fell into show business and managed to turn a simple recommendation into a Hollywood career. However while the film hits all the highs it also deals with the lows, the sexual harassment, the stereotypical roles, the racism, the abusive relationship with Marlon Brando, the suicide attempt. Its a tale most people don't know and one that will rock your world, if only because you won't believe that she survived it all and yet managed to rattle the pillars of heaven.

And she did rattle the pillar of heaven and change the world thanks to he refusal to go anyway but her own. How else did she get the lyrics in Westside Story changed because of their racism? She open doors for other Latinos, stood up for human rights, for women's rights and changed everyone she worked with.

This is a super film about a super woman.