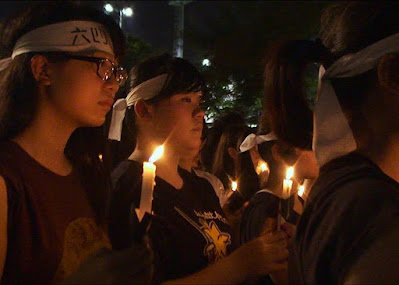 Eight years in the making and certain never to openly play China, OUTCRY AND WHISPER is a real raw face punch look at the women who have been taking on the Chinese government and society in general concerning their attitudes toward women. It is a damning indictment against not only the Chinese government but sexism wherever it occurs.

The film shows us the real cost of being an activist. A combination of archival material, shot on the sly reporting, fly on the wall material, animation and other material OUTCY isn't full of pretty pictures but instead it is shot through with images that reveal life as its being lived. We see the abuse that women are faced with and we see what the women are ding to not only call attention to it but fight it as best they can.

While everyone will focus on the opening sequence where we watch as Zhao Yue  slices her face with razor blades, the film is so much more than that. Yes the images are arresting but for me the more powerful stuff is the cellphone video and observational footage that place us in the trenches. I felt bruised and battered and I wanted to look away but I couldn't. Its loud pained scream that demands our attention

As I said at the top this film truly is a punch in the face.

It is a must see when it plays on Ovid.tv starting tomorrow.