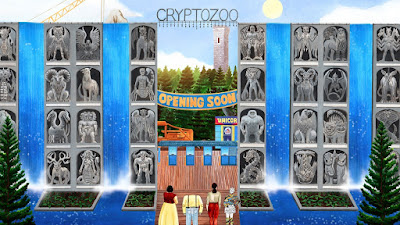 CRYPTOZOO begins  with the recounting of a dream abut storming the capitol and taking it over and forming a world where we all can live in peace. It then moves on to a man being speared by a unicorn and his girlfriend in a rage beating it to death. One thing is troubling for the context of the world the film has been birthed into and the other is troubling simply because it's a disturbing sequence. From there the film spins off into the story of a woman who is trying to save all the "mythical" creatures in the world before the government or collectors can snatch them and use them for evil purposes. It is often violent, occasionally sexually graphic and not for all audiences.

As some one who hated director Dash Shaw's first film my saying that this is a film I admire is saying a great deal.  While I have a lot of issues with the film, and I just kind of like it, I still think it has a somethings going for it. For example the film has several moments of great beauty and the plot actually isn't bad when you get down to it.

The problem for me is I don't know if Dash Shaw can fully tell a story. While less meandering than his first film, the plot still moves with fits and starts and has a raw nature of a a big schooler trying to write something bigger than his experience. It doesn't help that the art frequently looks like the work of good but still learning young artist.

My issues aside I will give it points for decidedly being it's own thing with the only thing I can compare it to is the work of Japanese artist Ujicha (Violence Voyager, Burning Buddha Man) expect that it is more hopeful and less disturbing.

Worth a look for Shaw fans and the adventurous,  it a film that just missed for me.