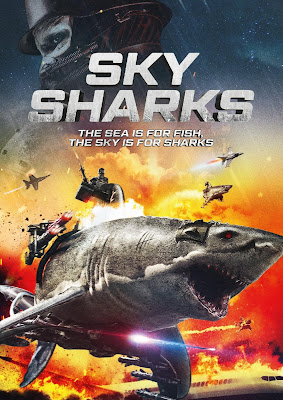 I am tempted to just walk away from film reviewing forever because on some level I have seen the perfect film. I mean it is high concept, it delivers on that concept and has zero pretentions. Sure it's a little long, but you can forgive that. Best of all it is the sort of thing that is essentially review proof. You are either going to love the film to death or you're going to run for the hills.

What is the plot? An artic research team finds an old Nazi ship and releases the lost secret weapon-zombie soldiers who fly on sharks. A secret response team has to stop the carnage.

The highest of high art.

…but oh man is it fun. It knows it's off the deep end but just freaking goes for it. There's blood, and body parts and jokes and sharks and zombies and cameos and more blood and green screen and not a serious thought in it's head. Make no mistake they everyone knows it's a goof  but they play it all deadly straight, selling it all beautifully because you have to for a film like this to work.

Are you going to like this film? Just ask yourself if the idea of zombie Nazis on flying sharks intrigues you. It it does this film is for you. If not just skip it.

Recommended for those who like this sort of thing- all others stay far far away.