Sometimes life puts people in your life for a reason. For some crazy reason life made me meet Ernie Stevens. I met Ernie when I interviewed him after  I fell in love with the HBO documentary ERNIE AND JOE: CRISIS COPS. The film is about Ernie and his former day job being a cop who handles crisis situations. If someone was threatening violence or to hurt  themselves or others they would call Ernie and his partner Joe Smarro to defuse the situation. (The film is deeply moving and a must see.) The interview was an absolute delight and in the aftermath Ernie and I began to talk on line trading films, jokes and good places to eat.

Because of the conversations over the last year Ernie has become part of the extended Unseen Films Family. He has a wonderful taste in films and I've tried to get him to write up some of the films he's recommended to me, but because of work and life he hasn't been able to do so.  However a week or so ago when I sent out an email asking what film made you happiest in 2020, Ernie emailed me and asked me if I had covered CRIP CAMP. When I said I hadn't  he told me he would like to write something on it.

What follows is Ernie's first piece for Unseen Films and the first review of 2021. While the piece is in part a review, it is also a wonderful piece  that illustrates how we connect with movies. Why Ernie picked this film is something special. Its the sort of  connection that we all make with many of the films we fall in love with.

I want to than Ernie for taking the time for a wonderful piece. And ask him yet again to do more. 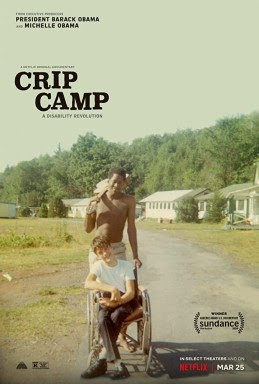 I wanted to take the time to share my thoughts about an amazing and inspiring documentary that I watched this year.  As we know, this year has been a difficult year for so many people around the world and to be able to find a silver lining has been difficult at best. Enter the documentary, Crip Camp, 2020, a film by James Lebrecht and Nicole Newnham.  The premise of Crip Camp is to introduce the audience to a summer camp located in Catskills, NY.  In 1971, both adults and adolescents living with disabilities gathered at camp Jened to enjoy a summer together as this documentary was being filmed.  Little did the campers know that they were just beginning a lifelong journey together.  This documentary inspires the audience to join them on this journey that would start a movement that couldn’t be derailed.  One of my favorite quotes of all time is, “vulnerability is the most accurate measurement of courage.” This film showcases the courage of people who live with disabilities and the stigma and unequal treatment they must endure daily.

At the end of the summer of 1971, the campers depart and return to their daily lives.  Many of the campers stayed in touch with each other and would soon be reunited a few years later in San Francisco. Members of the community living with disabilities would develop the Center for Independent Living and they would begin to grow into a support group for others.  On several occasions, the government would be asked to consider a legislative bill known as 504.  This bill would allow those living with disabilities to attend public school, have access to ramps and elevators, and provide access to public transportation as well.  On two different attempts to have this bill passed it would be defeated and those living with disabilities would continue to face the same struggles as before.

In 1977, during a protest in San Francisco, a federal building was occupied by members with disabilities and a sit-in ensued for 28 days.  During this time several members of the disability community led by Judy Heumann went to Washington DC to encourage members on Congress to pass the 504 Bill.  The bill eventually passed, and the Rehabilitation Act of 1973 was enacted giving those living with disabilities equal protections under the law.

My takeaway on this amazing documentary is one of encouragement and gratitude.  I am very grateful for this film because my family today in 2020 reaps the benefits of those who refused to take no for an answer.  My daughter has 504 protections as a student who lives with ADHD.  This documentary allowed those campers in 1971 to be their unapologetically authentic selves. Because this year has been so difficult for so many people it was uplifting to see others come together for a common goal to change the culture for those living with disabilities. I encourage other to watch this documentary and take the journey with the campers from camp Jened and experience a truly heart-warming story of courage and strength.