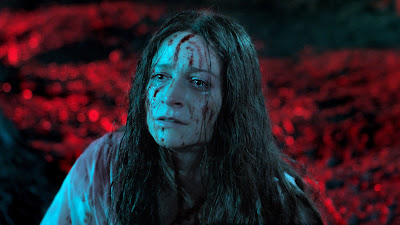 The during 1980's video nasties debate in England a film censor runs across a film that mirrors the the tragic events that happened to her and her sister years before. This then sets her on a course to find out if there was perhaps a connection

This well made and perfectly constructed film is missing a heart and any scares. Made to echo and riff the 1980's horror films, as well as some  from the 1970's (say Argento's SUSPIRIA) the film spends too much time trying to be a homage instead of something original.

I have to give director Prano Bailey-Bond  a lot of credit. She has made a beautiful horror film. Its one of the best looking horror film in years. Its a stunning film. The problem is she left the scares in the editing  suite. I never felt any chills despite the films best efforts.

I was lucky enough to watch this at midnight during the world premiere. I love to watch horror films late at night when the scares get intensified by the sleep that is dancing around my mind. I've been accused of liking some horror films simply because I watch them only late at night. That maybe true but you have to watch horror movies when the monsters are supposed to come out. Its a magic time and that was why I chose to watch CENSOR then.

The trouble is instead of drifting off to monsterland I just saw the construction. I admired the craft of the filmmaking but all I could see was the construction. I could tell how the plot was going to go because it mirrored the 80's films so perfectly. Worse I could see the lifts and riffs way too clealr to the point where any suspense was drained.

Perhaps I've seen too many horror films but I was disappointed.