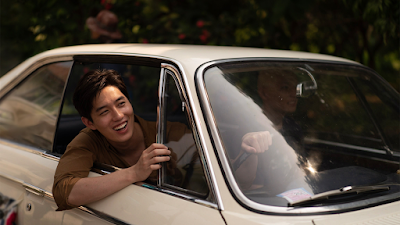 I am going to be honest- I don't know what I think of ONE FOR THE ROAD. Actually I do know, I love the film but I am not certain to what degree.

The film is the story of a man named Boss. He owns a bar in New York. Out of the blue he gets a call from an old friend Aood. Aood is dying and he wants to travel across Thailand and close out accounts with friends he feels he wronged. He needs Boss to go home and travel with him.

Yes, we've been here before, this is a road film after all, but director Baz Poonpiriya makes it something special. Taking a great cast, a light but assured touch that quietly wraps it's hands around your heart and a soundtrack that is one of the most perfect I've ever run across, Baz has fashioned a deeply moving film. Several times over the course of the film I stared at the screen tears streaming down my cheeks thanks to characters I loved and a perfect selection of songs.

I can't stress how amazing the score is. A mix of songs from everywhere, including well worn rock classics, each song is perfectly deployed. Even the ones you never wanted to hear again is made glorious by how Baz has stitched it into the fabric of the film.

The truth is the craft of film is as good as it gets. In the press notes Baz Poonpiriya says that this is the first of  his films where he said his true self was revealed. He said that working with Wong Kar Wai, who produced the film, allowed him to let the real filmmaker out. May the filmmaker never go back in. I am in awe of this film, it shouldn't work, he shouldn't be able to take a film that is nominally a road film that we've seen before, mix in songs and images that are overly familiar and have it all come out in away that is truly unique and deeply moving.  What cinema god is on his side because I want them on mine too.

Did I say that I loved this film?

I loved it so much I screamed out loud because I saw it while it was under embargo and I couldn't gush about it in public.

Highly recommended ONE FOR THE ROAD is on my best of 2021 list and it has taken up a place in my heart.